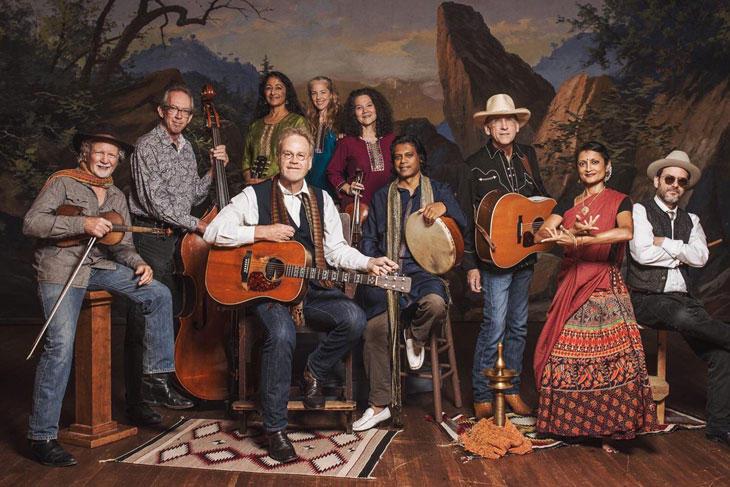 Bob Livingston’s COWBOYS AND INDIANS
with the Sacred Cowgirls

You may think you know what veteran Texas musician Bob Livingston is up to, but COWBOYS & INDIANS defies expectations at every turn. Unlike the children’s game, these cowboys and Indians are allies, not enemies, and the Indians come from India, not the Wild West. Livingston got the idea for the group while he was in India for a U.S. State Department cultural exchange tour. Local musicians, using their indigenous instruments, sat in almost every night. Everyone mixed themes, influences, rhythms, instrumentation, and insights from both East and West. They played songs & yodels from Texas and ragas & chants from India. A newspaper in New Delhi called it “country ‘n eastern music” and “the Wild East!”

Inspired by these experiences, Livingston wanted to take the sounds and charm of the Indian shows back to Texas. He got together with an old songwriting friend, Bobby Bridger and they wrote new songs and tossed around ideas for a show in Texas schools and theaters. The concept for COWBOYS & INDIANS began to take shape and some great musicians, drawn from the vibrant Austin international musical community, including Oliver Rajamani, Bradley Kopp, Anu Naimpally, Richard Bowden, David Carroll, and Steve Schwelling joined up.

THE SACRED COWGIRLS are an all-woman Bollywood cover band that puts a twist on vintage Bollywood hits. They started as a gaggle of gals galavanting about with Bollywood classics. But as time went on, they decided they wanted to do more with them than just “cover” them. These days, they find our own versions of the songs, sometimes re-interpreting them to a variation of original “American” music that many of the Indian Bollywood-style composers borrowed.