La Fenice Austin and Heartfeltricks present The World of Harlequin, Then and Now at the Austin Scottish Rite Theater

Austin, TX (October 17th, 2013) – 2014 marks the twentieth anniversary of the first performance in Italy of The World of Harlequin, Then and Now, an educational play about the history and practice of Commedia dell’Arte. Now on the eve of that anniversary, and with financial assistance from the Texas Commission on the Arts, La Fenice Austin, in association with Heartfeltricks is proud to make this uniquely informative and entertaining performance available to students in the state of Texas. Though this production normally tours to area high schools, La Fenice is pleased to announce that there will be a public performance at the Austin Scottish Rite Theater on Sunday, November 17th at 2:30pm. 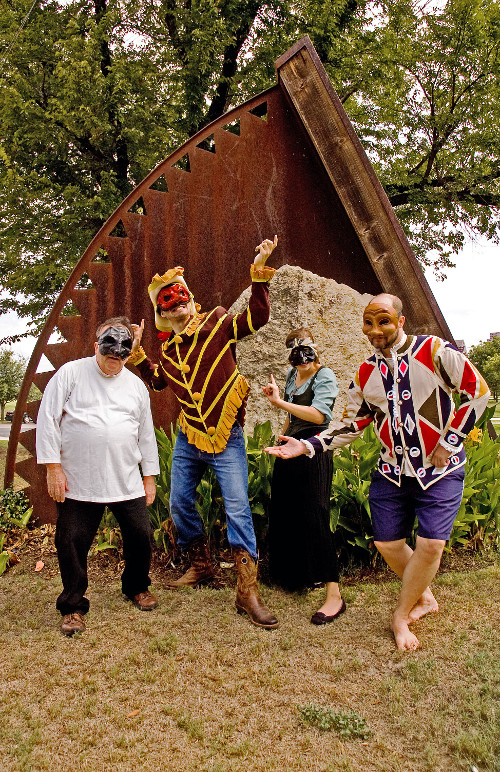 The World of Harlequin, Then and Now is an approachable, entertaining, and instructive introduction to the techniques and methods of the first professional performers in the history of Western Civilization. The one-act play opens with a group of students engaged in a discussion about Commedia – the relationship between improvisation and written text, the function and meaning of the masks and stock-character types, and the organization of acting companies – embellished by slides and practical demonstrations. Captivated by the characters’ quirky charm and the mysteries surrounding the history of the Commedia dell’Arte, the students attempt to enter the world of Harlequin and his friends by staging their own apparently improvised scenario. The play concludes by reflecting on the historical trajectory of the Commedia dell’Arte in which improvisation and stock-characters eventually gave way to scripted plays, shifting the emphasis from an improvised comedy of masks to a fully written comedy of characters.

Heartfeltricks is responsible for providing educational outreach programs on behalf of La Fenice Austin. The company was originally founded in Toronto in 2001 by Dr. Giangiacomo Colli as a theatre organization dedicated to the goal of promoting a greater understanding of Commedia dell’Arte among young audiences in North America. In 2010, Dr. Colli began a close association with La Fenice Austin serving as the guest director for the production Suitors and Tutors which was nominated for a B. Iden Payne award. In 2013, La Fenice and Heartfeltricks agreed upon a merger and we are proud to celebrate this newly formed bond with the flagship production of The World of Harlequin, Then and Now.

The play is the English adaptation of Dalla Commedia dell’Arte a Goldoni, il Teatro come Professione, written and directed by Dr. Colli in 1994 and performed by the Italian theatre company Teatro di Sardegna. The English version premiered in 2001, at the George Ignatieff Theatre of Toronto as part of the exhibition Harlequin Unmasked: Comedy Transformed. It was then staged again in 2004, sponsored by the Italian Cultural Institute of Toronto, touring to high schools in Ontario. Aaron Johnson, Artistic Director of La Fenice, has worked closely with Dr. Colli to adapt the play once more for high school students in the state of Texas.

The World of Harlequin, Then and Now stars stars Dr. Gian Giacomo Colli, Aaron Johnson, Kelly Matthews, and Keith Adam Paxton. This show is recommended for teenage audience members and their parents.

Who: La Fenice Austin and Heartfeltricks.

What: The World of Harlequin, Then and Now.

Feels Like a Maternity
By Gricelda Silva
Now streaming