You Are My Sunshine, with Terry Galloway 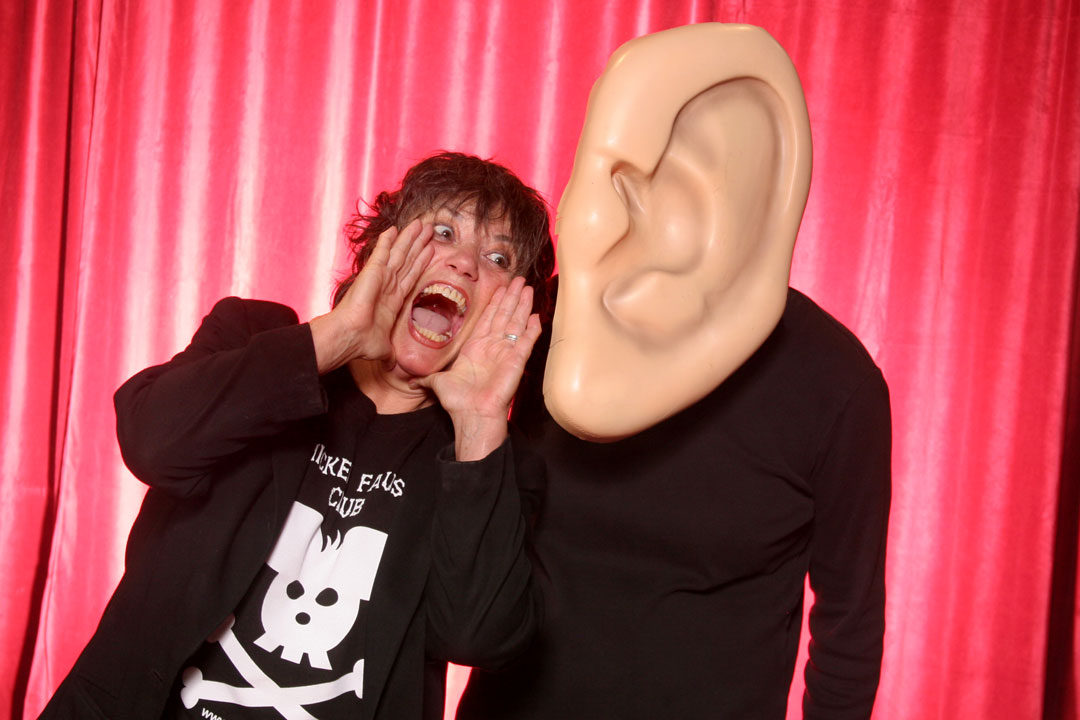 Terry Galloway spent years living in silence, until technology in the form of a cochlear implant caught up with her. “You Are My Sunshine” is Terry’s comic, sometimes moving, sometimes profane exploration of what happened after she literally regained her senses.

Esther’s Follies co-founder Terry Galloway performed “Sunshine” last August while in Austin playing the role of Falstaff in Scottish Rite’s gender-flipped version of The Merry Wives of Windsor. Now by popular demand she returns to Austin to perform her autobiographical “You Are My Sunshine.”

Austin audience comments about “You Are My Sunshine”

“…incredibly moving, funny, tender, and tragic all at the same time, [providing] important perspective of what it is like to grow up with a disability to those who are privileged to have no chronic illness while reaffirming for the hearing-impaired in the audience who related to the performance on an entirely different level.” – Craig Hurwitz, MD, Associate Professor of Pediatrics, Dell Medical School, Dell Children’s Medical Center, Division of Pediatric Pain and Palliative Care

“Terry investigates the controversy among the deaf community about whether deafness should be ‘the way of life’ for the deaf, or if it needs to be ‘fixed’ or ‘cured.’ ” – Dr. Kirsten Kern, PhD, LMT

“As someone with hearing loss, this show was an incredible experience for me, and I think everyone should get a chance to see it.” – Sarah Appell

“It’s a pitch perfect event that strikes so many resonant chords. ‘You Are My Sunshine’ produces moments of profound reflection, thoughtful tears and unadulterated belly laughter in the same performance. In addition it’s chock full of large doses of data and insight to the world of the hearing impaired person who is trying to find their place amongst disparate communities and those challenges.” – Don Brode, MD

Terry Galloway is a German-born/Texas-raised, deaf, lesbian artist and activist. As a globe-trotting, grunt-work performance artist, she’s performed all four of her one-woman shows, directed by her wife Donna Marie Nudd, in a variety of venues from the American Place Theater in New York to the Zap Club in Brighton, England. When she lived in Austin, Terry was known for her cross-dressing performances at Shakespeare at Winedale and at Esther’s Follies, where she was a founding member. She also co-founded Actual Lives Austin and Actual Lives Tallahassee, the writing and performance workshops for adults with disabilities. In Tallahassee, Florida she’s best known as Mickee Faust, the cigar-puffing, beer-swilling evil rat (twin to a certain unctuous rodent in Orlando) who heads up the Mickee Faust Club, a theater, radio and video performance company that bills itself as “community theater for the weird community.”

Over her 39-year career as an alternative artist working on the theatrical fringes, she has won grants, fellowships and awards in theater, literature, radio and video from the National Endowment for the Arts, the Texas Institute of Letters, Pew Charitable Trust, Columbia University, Austin’s Circle of Theatre’s, NYC’s Villager, the Kennedy Center, the Florida Division of Cultural Affairs, Public Radio News Directors Incorporated and the Corporation for Public Broadcasting. Her articles, monologues, poems and performance texts appear in numerous anthologies about queerness, disability, theater and Elvis. Her memoir, Mean Little deaf Queer published by Beacon Press, was a Lambda Award finalist and winner of the Golden Crown Award.