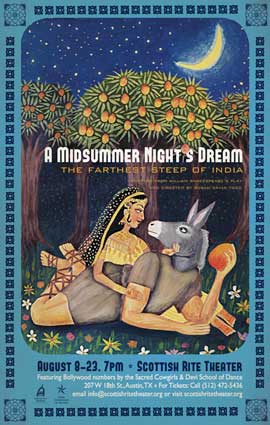 A MIDSUMMER NIGHT’S DREAM
The Farthest Steep of India

“Lord, what fools these mortals be!” A Midsummer Night’s Dream, Shakespeare’s most beloved comedy, collides characters from various worlds–nobility, laborers, and even fairies. In the woods near Athens, the mischievous Puck amuses himself by casting spells and exposing the follies of romance at every level of society. Lovers’ triangles, mistaken identity, love potions, and time gone awry are just a few of the ingredients that make this classic timeless, magical, and hilarious.

This traditional production of Shakespeare’s Midsummer begins in the ancient Athenian court and moves to a natural world ruled by fairy deities “come from the farthest steep of India.” Enjoy this classic as never before with an Austin star-studded cast; classical, folk and Bollywood dance; and live music by the Sacred Cowgirls.

“Central to Shakespeare’s Midsummer are references to the fairies having come from India. The stylistic connection between Midsummer and Bollywood is a natural; it’s surprising we don’t see it more often in productions of the play.” – Susan Gayle Todd, Artistic Director

See our visit to KXAN!